About the MINI
Cooper Pro 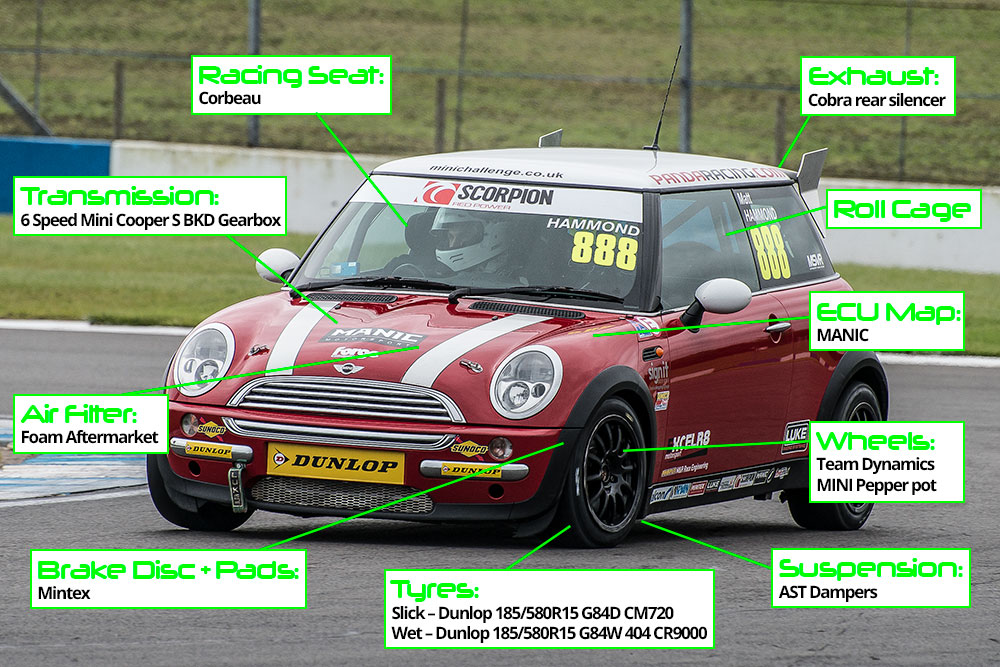 My car is converted from a standard MINI Cooper (2001-2006 model) which was then completely stripped internally apart from the dash which remains. Stripping out unnecessary equipment makes the car lighter.

An electrical fire extinguisher is installed as per MSA regulations, along with an electrical isolator – both are accessible from inside and outside the car.

A roll cage is installed bolted and mounts welded to the chassis to meet with safety regulations.

The MINI was fitted with a 6-speed BKD gear box and clutch, replacing the former 5-speed gear box which was too weak for racing. The Cooper S box is more reliable.

Powerflex polyurethane engine and suspension bushes fitted to stiffen up the car increasing durability and handling. AST adjustable dampers all round to allow for quick ride height and suspension firmness allowing for fine tuning to each track. The MINI uses a standard road going engine with exception of the exhaust valves which are from the Cooper S and foam air filter. The engine is tightly controlled by the organisers so that budgets are kept down and the racing is made as fair as possible

The ECU is mapped by Manic and this made the biggest difference for my car – increasing max power around 5,200 rpm to 7,000 rpm. After the car was mapped the little MINI came alive and is great fun to drive.

I use a Corbeu Revenge racing seat which on a race weekend is the most comfortable place to be and inbetween races I can often be found having a cheeky nap. This seat along with my racing harness strap me into the car so you can feel what the car is doing.

The gear stick Cooper ball has been replaced with a stainless thin handle to allow me to make rapid gear changes smoothly. Shift lights have been fitted – these do two things for me: one, allow me to keep my eyes on the track on up change when the red light flashes; and two, stop me from down-changing too early. This can easily be done in any car and can damage the engine a lot more than hitting the rev limiter while going up through the box.

A Racelogic lap timer is the last addition to the cockpit allowing instant driver feedback and is an invaluable tool for going faster.

Outside the Team Dynamics alloys look the part and fitted with the Dunlop slicks provide phenomenal grip – in fact although the top speed of the MINI is roughly 115mph at any track the cornering speeds can be far faster than most other cars out there – I have had to lift off the power at several corners because of a GT car having a slower apex speed. Towing eyes are a mandatory accessory (that hopefully don’t need to be used) as are the bonnet catches – which allow quick easy access and secure fixing.

Most fluids are free to choose from but the fuel as a control fuel supplied by Sunoco and again has an increase in performance over normal pump fuel. I have found the Cooper a great entry-level race car and class for new racers of any age to start car racing and hone their skills and gives a great foundation to progress to other classes.